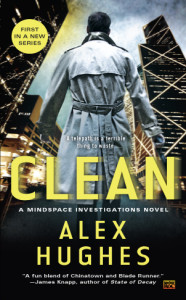 I used to work for the Telepath’s Guild before they kicked me out for a drug habit that wasn’t entirely my fault. Now I work for the cops, helping Homicide Detective Isabella Cherabino put killers behind bars.

My ability to get inside the twisted minds of suspects makes me the best interrogator in the department. But the normals keep me on a short leash. When the Tech Wars ripped the world apart, the Guild stepped up to save it. But they had to get scary to do it—real scary.

Now the cops don’t trust the telepaths, the Guild doesn’t trust me, a serial killer is stalking the city—and I’m aching for a fix. But I need to solve this case. Fast. I’ve just had a vision of the future: I’m the next to die.

Bob looked up. He was an overweight, balding caricature of a fifty-something cop—he even liked donuts—and he couldn’t chase down a suspect on foot if his life depended on it. But he never had to; Bob did something else completely.

He frowned again when he saw me. “Hello.” It wasn’t a greeting. I must have interrupted something, but I didn’t care. The urgency of the vision was still riding me, the pain and the desperate need to head it off, to make it not happen. I wasn’t supposed to talk to Bob without authorization—wasn’t supposed to be taking up his valuable time, wasn’t even supposed to be in the protected section—but right now I didn’t care. I’d deal with the consequences later.

I pulled a piece of paper from my back pocket and unfolded it, laying it across the front of his cubicle. There they were, my five names I’d spent an hour pulling out from hundreds of pages of data. All strong telepath/teleporters, all within two hundred miles of Atlanta (the largest range I knew of for a teleporter). I was hoping—hoping—by some miracle one of the ones on this list would match the guy in my vision. The odds were against it, but I had to try.

Bob took the paper and smoothed the edges down. I could see his fingers flex absently as he started processing, and the monitor behind him flashed a steady stream of images I couldn’t understand. Tower, egg, golden retriever, sixteen houses in a row, then data in long solid lines. After a few seconds, Bob remembered me and looked up again. I could almost see the lines of data swimming behind his eyes.

“Could you get me pictures?” I asked, uncomfortable but determined. I had to have information, and quickly.

Bob nodded, then turned back to the monitor. The next four and a half minutes crept by as he sorted through the entirety of Earth’s WorldNet. I’d never seen him take this long before, not foranything. Either what I’d asked for was harder than it sounded, or he was checking Station records too. Not Mars and Calista, not the Belt; those Webs took twelve hours minimum for free access; even I knew that. But the Station was faster.

What Bob was doing now would have taken me three days. Not for the search itself; most of that was automated. But to sort through the three million hits to find the ones I wanted, to chase down a hundred false leads that looked good—it took a while. Or would, with all the Electronic Crimes safeguards. But Bob . . . Bob had an implant, one of those cybernetic wonders that let him sort as fast as he could think. Faster than he could think, if he was good. He was.

Implants were vanishingly rare, since nearly half a million people died with the Wetware Virus in the early two-seventies, right at the beginning of the Tech Wars. No one wants to take the risk of frying the brain—and worse, people are afraid of anyone who does. Bob had gotten his implant late, five years beyond the curve; he was still the youngest person I’d ever met with one, and he’d been ostracized his whole life for it.

But as for me, even if I’d wanted an implant—and been willing to take that kind of risk with my wetware, willing to be different and feared even more than I was—I couldn’t get one. Strong Abilities and implants didn’t mesh; the competing energy fields tore each other apart, and you were lucky to end up in a coma—lucky. So I was stuck doing a hunt-and-peck with the rest of the world through Quarantined data or asking help from someone like Bob. He wouldn’t ask a lot of questions, just get me the information. Even if he didn’t like me much.

His body language changed abruptly, and my attention came right back to him. His hands gestured wildly and then settled. The screen came up with thirty pictures, arranged in a neat row. Bob sat back, pleased with himself.

“There are seven pictures there, Bob. The list had five names.” I wasn’t even looking at the photos, I was so distracted by the long line of people. The last, a random woman with gray hair, looked vaguely familiar.

“You want to tell me how to do my job?” Bob smirked, arrogant. It didn’t sit well on his too-friendly face, as if he looked too harmless to ever hold the cards that he did.

“I asked for five pictures,” I returned, putting a full hand of fingers up. “Five.” It was important that none of this got screwed up, that it all got done right the first time. We didn’t have time to make mistakes.

“No, you asked for pictures from the global list of people with some very odd things in common. All Guild members with high-enough ratings that Guild membership is compulsory— and also on the Guild Spook Watch list. They all have current wills and three traffic tickets or more. Four out of the five had an aunt or great-aunt named Edna. . . .”

“It was a popular name.” I also had an aunt named Edna, and I didn’t see what that had to do
with anything.

“…The last with a second cousin of the same name, all advanced speakers of a second or third language with a current passport and no children. You thought you had me with the Edna thing, didn’t you? And leaving the last two names off the list, that was devious. But those many things in common, it wasn’t hard to find them.” He reached forward and hit the PRINT button. Then he turned back. “Have another puzzle for me?”

“Not right now,” I said, all bravado and desperation. “But I’ll be back.”

I took the printout from the pile next to the printer—Bob had helpfully labeled it with my name and “seven pictures”—and took my first good look at the faces of the people.

The second row, first column, staring out from next to the faces of random strangers. That was him—the perp from the vision—and suddenly the urgency rode me like a horse, spurs against my side, and I knew what I had to do next.I looked at the line of text underneath the picture. Jason Bradley, age thirty-one, resident of Atlanta, was not going to get away with it. I was going to stop him before he ever got the chance to strangle me, to turn Cherabino into something that stared blankly at a wall. That future couldn’t happen. At any cost, it couldn’t happen.