If you’ve been following me on social media, you know that I recently visited New York for ComicCon. Since I’d never been to New York before, that was a little nuts (in a great way). I’d only ever seen the city in television and the movies, and it was both more and less than I was expecting.

I landed in JFK, because what do I know and the flight was cheaper. Then I take a taxi to Times Square. My hotel was supposedly the Times Square South location. One would think it was at Times Square, right? Actually, no, it was ten blocks south in 36th, but that’s another story. So, first foot set in New York, in the middle of the hubbub of Times Square, culture shock in all its loud glory. I get lost. Three times. I finally only make it due to the kindness of a random doorman. (“Are you lost, honey? Can I help you find it?”) Then I make it to the hotel, but it’s the wrong hotel. Time for good directions, deep breathing, and a stop at Olive Garden because they’d actually let me sit down. Then a ten block trek south before I finally find it. 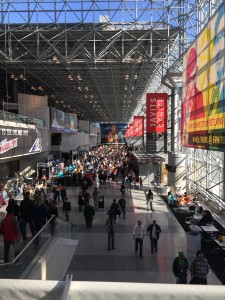 That was early on Saturday. Later the mound of people (seen at the back) covered the entire floor. It was overwhelming. Truly, truly overwhelming. Getting lunch was a little like scaling a high mountain in a thunderstorm. You needed a sherpa to get anywhere in good time.

I was amazed at how friendly the New York geeks were. People would actually talk to you about your favorite fandom in line for coffee, sitting in rest places, even in line for panels. They showed up in costume, they had joyous opinions, and when they heard you didn’t know about the Favorite Thing they were there for, they’d share all the details with you so you could love it too. If New Yorkers are as rude as advertised, I didn’t see it at ComicCon. In fact, they were very warm.

I was on the Doctor Who panel with some amazing folks, and the audience was wonderful too. (You can listen to it in all its glory here at the 6:00 mark thanks to the amazing Anton Strout.) I was also lucky enough to make it to other panels that made me squee in fangirl glee. Also-NASA. And companies in space. In space!

After collapsing into a small puddle at the end of the weekend, I was lucky enough to have lunch with my amazing editor, Rebecca Brewer, who I had also able to hang out with during the con. Rebecca is from Texas, and a total nerd, and it was such a joy to meet her in person. (I will admit to having knit her a hat.) She was kind enough to get me sorted on the subway, otherwise known as the most confusing place in the world, and I was off to see more of New York.

I saw Mood, the Project Runway store that was *way* bigger and more cramped than I ever expected. 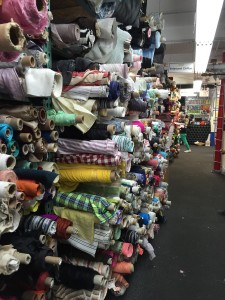 Look at all the fabric. In piles. It takes up FAR more room than walking. Who needs walking?

Also, I went to see The Last Ship, which was really great. Broadway type musical! With cool choreography and a totally unexpected feel. LOVED. My writer brain wants to rewrite the ending though 🙂

I met up with friend A.E. Decker to do the grand tour of the city on Tuesday. (9.5 miles of walking. I know because pedometer.) We visited the Obscura shop from Oddities, had astonishing bagels and scones, and saw the Fashion District, the Village, a really cool comic shop with Planet in its title, and many other areas that made me happy. I love that you can walk everywhere in New York, but I dislike that you aren’t really allowed to sit down. Ever. Considering I was toting a 30-pound bag (because visitor), the not sitting thing became a problem!

My all time favorite stop? The amazingness that was Chocolate Moderne, a place on the fifth floor of a nondescript building where you have to tap on an unmarked door to get in. Their chocolate is a spiritual experience. 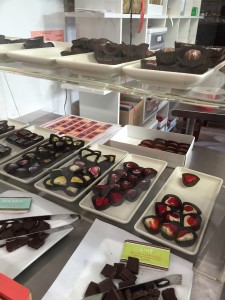 Then off to Pennsylvania with my friend, a knitting shop, a vinegar store, and brainstorming for more amazing stories. Then the plane home, happy and exhausted from all the people and all the sights. A wonderful week, but tiring! I needed two days to recover from introvert burnout. So happy though. 🙂