It all began at DragonCon. Ah, glorious DragonCon, home to tens of thousands of delightful science fiction and fantasy fans… and the infamous Con Crud, that nasty sickness you get from rubbing shoulders with folks who don’t sleep all weekend…

I was greatly fortunate to be able to spend some time at the SFWA table, where I got to share the joys of SFWA with writers who hadn’t heard yet – and, well, shamelessly promote my book and the books of other hardworking writers such as Cassie Alexander. (We have never met, but I adore her work. You should check it out.) I got to meet Rob Reid and E.C. Myers, talented writers both, and Jaym Gates, the publicist for SFWA and a writer herself. Glorious times.

Then it got better. My publicist at Roc had given me a box of my books to give away at DragonCon, so I got to sign them – like a real author – and hand them to total strangers. (Hooray!) I was amazed at how quickly they disappeared, and how many friends showed up to wish me well.

Then came my First Panel Ever, on Monday morning, with an amazing group of writers including Kalayna Price and D.B. Jackson. After an author friend gave me a pep talk, I sat down and talked about me and the book. Apparently I did well – the audience stopped by to talk and find out how to buy the book! I am incredibly excited.

But then I got home, and the little tickle that had been in the back of my throat turned into a full blown case of Con Crud. And my week turned sepia and runny, and reality disappeared into nose-blowing, coughing, and generally feeling like crap.

But I could not be knocked down! No, this was Release Week! And the glorious Internet needed guest blog posts. So I napped and wrote, wrote and napped, read reviews and haunted Amazon to see my sales numbers.

On Tuesday morning I was ranked #100,000 or so in the Kindle store. By afternoon I was #30,000… then Wednesday, 15, then 6, then 5! I did a happy dance all over the office, then had a coughing fit. Then went for Theraflu. The numbers have bounced around since then, of course (they do that), and the first sales numbers report I got on Friday only went through the previous Monday of sales, but all in all a glorious first release week. I was over the moon… when not coughing hard enough to reach it.

Then came Friday. I had invited countless friends and out-of-state family to my release party, and I would be there, come hell or high water. So, high on strong cold meds and drinking Gatorade like it was going out of style, I got ready for the party.

It was amazing! A whole bunch of my friends and family showed up to congratulate me… many of whom had read the first draft of Clean way back in the early 2000s. My author friends James Tuck, Delilah Dawson, and Janice Hardy were kind enough to read to the crowd, and there was much book buying and signing! There was also cake, glorious cake: 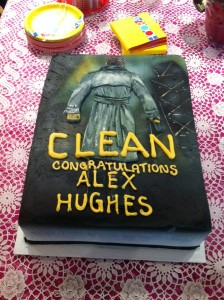 And a good time was had by all. My sister even made me sign a billion books for her and others. It was that moment – that moment – when it felt real to me. This thing I’ve been working towards for so long had really arrived.

Then I went back home and collapsed into a small puddle of sickness. And slept for most of the weekend.