Today’s “Nerdy” guest has a passion that I feel many of us share,  to some degree. In some tiny (or maybe NOT so tiny) nook or cranny of our homes/offices/attics… we’ve got them, we love them…  and today, author Jennifer Estep is going to share hers with us. 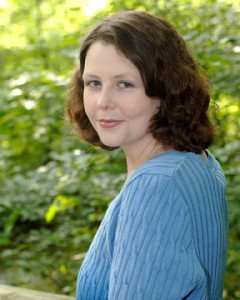 The action, the adventure, the daring escapes, the dastardly villains—I enjoy them all, whether I’m watching a superhero movie or TV show or reading a graphic novel. 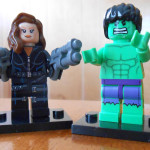 T-shirts, mugs, cups, keychains, magnets, figurines, calendars, ice-cube trays … I have all those things and more. Why? Well, I have to have to shirts to wear and cups to drink out of anyway, so I figure that I might as well have fun shirts and cups. Especially when I can get them with my favorite characters and some really cool designs. 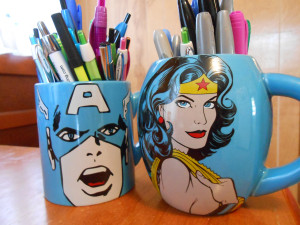 So where do I go when I need a superhero fix? One cool site is SuperHeroStuff.com, which has all kinds of superhero-themed items, from T-shirts to socks to shopping bags. If you like superheroes or want a T-shirt with a specific character on it, this is a good place to start your search. 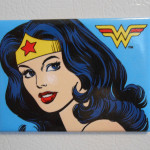 Redbubble.com is another good place to go for superhero-themed T-shirts, as well as just pop-culture characters in general. And then you have sites like Etsy and CafePress and too many more to name.

So if there’s something out there that you want with a superhero on it, chances are that 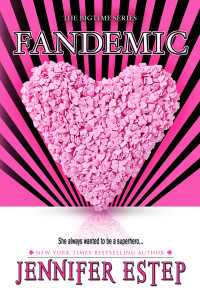 you can find it—and lots of other cool things to go along with it.

It’s just a great time to be a superhero fan, and I’m enjoying every minute—and T-shirt—of it. J

What about you guys? Do you have superhero-themed items? Who is your favorite superhero?

Jennifer Estep is a New York Times and USA Today bestselling author prowling the streets of her imagination in search of her next fantasy idea.

Fandemic, the fifth book in her Bigtime superhero series, was released on June 2.

Former marine biologist Allison Pang is the author of the urban fantasy Abby Sinclair series, the weekly Fox & Willow web-comic, and other short stories in various anthologies. She’s joining us today to talk about one of her passions…

If you follow me at all on social media, you probably know I’m a fairly into LEGOs. Case in point, the afternoon I was asked to write this post, I had just received my newest collection of ELVES LEGOs in the mail. (But more about that later.)

Let’s go way, way back to the early 80’s. In those days, LEGOS were pretty much considered to be a “boy” toy, at least by my family. Sure, I could play with them if I wanted (we had a large barrel of pieces my brother and I would drag out fairly often and build with) but when it came to the kits? Not something I ever got, no matter how much I asked for them.

To be fair, LEGO kits were somewhat limited in theme – you had the LEGO town blocks, which were sort of every day scenes – cars, roads, gas stations, etc., Castle LEGOs and Space. (The late 80’s gave us Pirates, but I was in high school by then and LEGOs were…not cool.)  My brother mostly had the space sorts, so that’s what I ended up using.

And that was fun, but as much as I enjoyed building space ships and having epic battles with my brother and his friends, there sometimes felt like there was something missing. Looking back on it now, it’s easy to point out that there weren’t any girl mini-figs and that probably had something to do with it, but also that the LEGOs at that time had a fairly limited color palette. 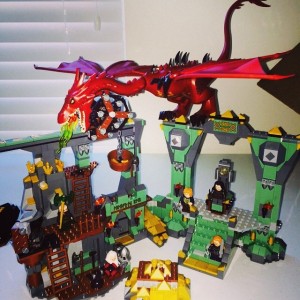 So fast forward a few years. I hadn’t paid attention to LEGOs in quite some time – except for the gifts I bought for family members. And even then most of what I noticed was the price. LEGOs can be rather steep, unfortunately, especially the larger, more complicated sets. (There is a Star Wars Death Star. It’s almost 4000 pieces and runs about $400 – I haven’t quite mustered the stomach to buy it yet, but one of these days…)

And then I had my son…and people started buying *him* LEGOS. And I started helping him put them together and realized how much they’d changed in the last 15 years. Namely, LEGO was producing licensed sets from 3rd parties – Marvel, DC, Star Wars, Pirates of the Caribbean, Harry Potter. And not only the sets, but the games for PC and Console – LEGO Star Wars, LEGO Batmat, LEGO Indiana Jones…suddenly I was completely enamored with them. 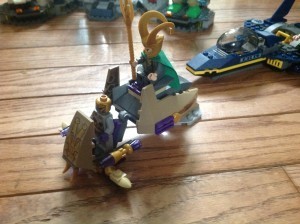 Instead of primary color blocks filled with generic space men, I had wizard towers to build. And in truth, I didn’t start buying LEGOs for myself until the Avengers came out and I just had to have LEGO Loki. Had to. And so I bought all the sets I could find, because I also really needed LEGO Black Widow and Thor, Iron Man and Hawkeye and Captain America. (And clever LEGO – so many of the characters are only available with certain sets, so if you want minifig X, well, you’re stuck buying set Y. It’s a racket, but what can you do?)

So that was fun – and the LEGO Lord of the Rings and LEGO The Hobbit came out. And yes, I have all those sets as well, from the little Frodo barbecue set I snagged off of eBay to the $200 Orthanc with Wormtongue and Sauroman.  And LEGO Legolas. And Gollum. Gandalf. All the dwarves. Smaug. Galadriel. Bilbo. Thranduil. (And the list keeps going on and on…) 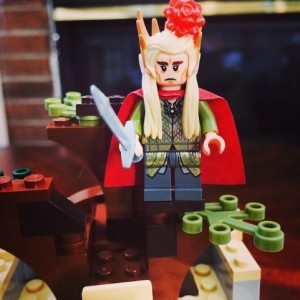 So why this obsession? (And I should note, that yes, I like LEGOs and I have fun putting them together, but I tend to stick to the kits. I don’t have the time or energy to do the really crazy stuff, like the to-scale models of the Serenity, or massive buildings. (Check out my post here on my blog for a gallery of awesome stuff I saw at a local LEGO con last year…)

I don’t know why exactly, but something about building soothes me. I don’t build LEGOs all the time – I buy up the sets as I can afford them and pull a few out when I’m in a period of high stress. Could be writing related, could be something else, but there’s a rhythm in sorting the bricks by type or color before I start that lets me clear my mind. I pick sets from my favorite fandoms or that appeal to me in some other way and allocate some time to work on them. 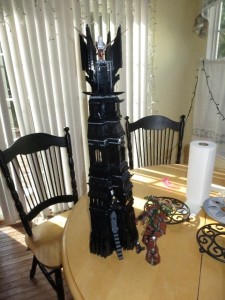 I suspect part of my inherent satisfaction is that after a few hours or a couple of days, I’ve got a finished set. I think that when I’m struggling against an issue – let’s say I’ve having problems with a plot, for example, working with the bricks gives my fingers and brain something to focus on, but still allows me to think things through. Plus if I’m struggling to feel like I’m accomplishing anything, a small set can at least make me feel like I’ve managed to do *something.* I tend to keep the small sets for stress, and the big sets for rewards. (LEGO Orthanc I did after I’d had back surgery and I needed something to distract me from the pain.) 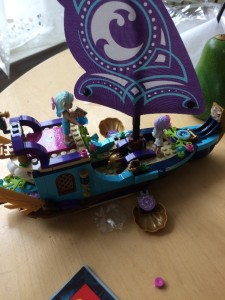 My newest LEGO sets are the ELVES. Now, I’ve got mixed feelings about them. On one hand, elves. Elves are always cool. The colors are pretty nice – definitely interesting, even if they are mostly pastels. Lots of really great little accessories that you don’t normally find in these sets…but they are the LEGO dolls  vs the more usual mini-figs.

You can see the difference here: 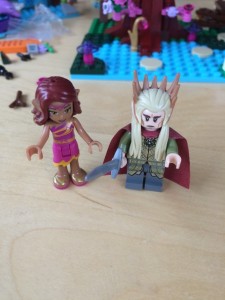 (And really, the biggest issue is that the dolls don’t have movable legs. They can only bend at the waist, which limits them – e.g. they can’t ride horses, like regular minifigs, for example.) 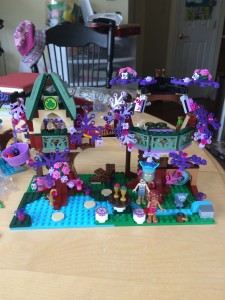 The dolls showed up at about the same time as the LEGO Friends series – basically, *sigh* LEGOS for girls. Which I guess is okay, but honestly, all they really need to do is add more lady mini-figs in their sets. I get very frustrated with some of the Hobbit sets since it’s basically a sausage factory – out of all the sets I own, there are 3 girls – Arwen, Tauriel and Galadriel. That’s it. I know the movies are like that too, but I don’t think I need two different Lake-town sets, honestly. How about Eowyn fighting the Witch King?

Back to LEGO Friends. Okay – so pastel colors, the mini dolls usually come with some sort of animal companion, and I guess the sets are supposed to appeal to little girls. But instead of being able to reenact scenes of battle and adventure…LEGO Friends get to go to the shopping mall. Or the juice bar. (There are some stables and vet set, etc, but still. A JUICE BAR??) What bothers me most isn’t the sets themselves – they are colorful, but so many of them are just so…passive. 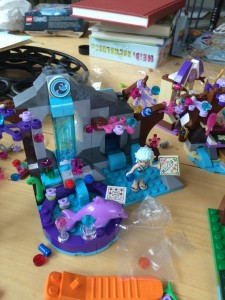 My daughter is 8. I asked her what LEGO sets she wanted for her birthday. Quick answer? Not LEGO friends. Long answer: Teenage Mutant Ninja Turtles and Minecraft sets. Fine by me. But I asked her tonight what she thought about the LEGO Elves (since she was helping me put them together) and her opinion is much like mine – LEGO Elves have better colors, but LEGO Hobbit has better architecture and more interesting characters.

That being said, the ELVES sets overall seem to be better than the default Friends sets. (The Spa is the only one I’m really giving the side-eye to – and even then, the waterfall thing is pretty nifty, so I’ll give it a pass.)

At any rate, I’ve gone on quite a bit here, so I’ll just wrap it up by saying that LEGOs are awesome and if you haven’t run by the toy aisle in your local Target, you might want to give it a shot one of these days to see what they’ve got, and then go get your brick on.

Thanks to Allison for stopping by today, and for giving us all something to “oohhh” and “aahhh” about (that Orthanc build is super impressive!!). Be sure to check out her website for all the info on her current stories and her works in progress. You can also find her on social media (Facebook, Twitter, Tumblr, Blog) if you’d like to chat.

How about the rest of you… are LEGOs your thing? Do you have the patience for the big projects? Do you like to collect kits from any certain fandom? I’d love to hear about your favorites — and even see some pictures, if you’d like to share — in the comments.