Today’s post is an introduction, of sorts. I’ve mentioned that revamping my blog is among my goals this year, and the first steps have been taken. I’m really excited about a couple of new features that will be starting soon. Of course, I’ll still be posting personal notes to you, and sharing book release and story information, but the new features will bring in guests and lots of fun new topics.

The first of the new features is called “Talk Nerdy To Me”. Yes, it’s exactly what you think it is! Fellow authors, scholars, and professionals will be joining us to talk about their geeky passions. Be prepared for a little bit of everything with this feature: science, sports, gaming, reading, traveling, crafting, etc. I’ve opened the door wide, and I can’t wait to share all of the interesting, nerdy things with all of you.

I’m also adding a “get to know you” interview series to the blog. Questions for guests will start with standard craft or story questions, but will also include fun, unique questions to add a little personal touch.

In addition, I’ll be starting my own series of weekly writing/editing blog posts. I hope you’ll find these offerings both interesting and helpful.

If you’ve got a suggestion for an author or other professional that you’d like to see featured here, definitely let me know. I can’t make any promises (deadlines and other schedule conflicts are hard to maneuver, sometimes), but I am open to your ideas.

So, keep your eyes peeled. New features will be starting very soon. Be sure that you’re subscribed to this blog so you’ll receive notice when new posts go up.

Today we’re starting a month long celebration of the release of VACANT! We’ve got guest posts, interviews, excerpts, and reviews lined up to give everyone a bit more info about the genre, the story, and me! Below you’ll find the complete tour schedule of blog hosts, and links to their sites. 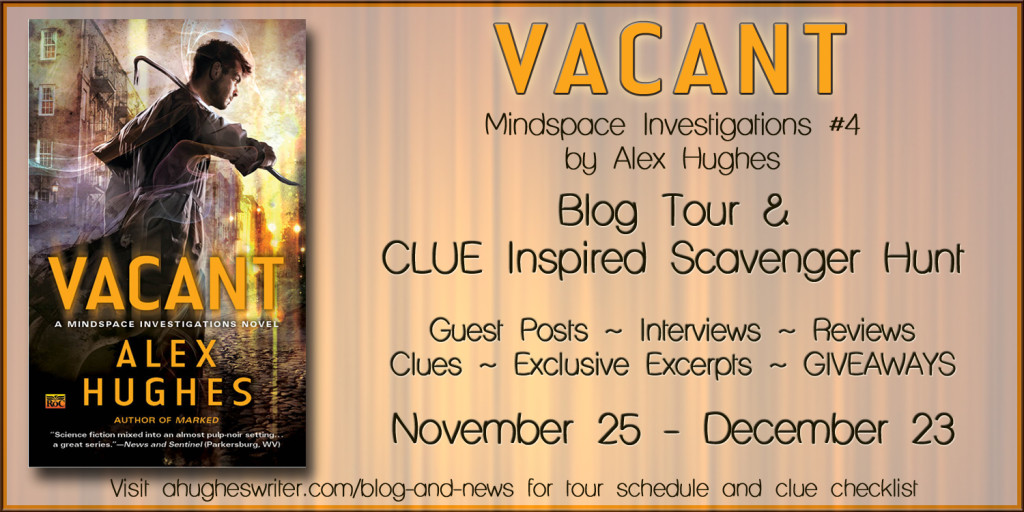 In addition to the posts, we’re doing a CLUE like scavenger hunt. In case you haven’t played CLUE… it’s a mystery game, and the rules are super simple…

Just like the classic game of CLUE, your job is to try to determine WHO committed a crime, in what SETTING, and with what WEAPON.

In our game to celebrate the release of VACANT, most of the clues will relate to the Mindspace Investigations world and characters.

At participating blog tour stops, you’ll find clues, clearly marked, that you can cross those off your checklist. At the end of the blog tour, you should be able to see who/where/what the culprit is by which items on your list are remaining. to be clear, the clues you FIND are not going to be the winning guesses… you’re trying to determine what is left at the end of the game.

Starting on December 20th, there will be a rafflecopter entry form here on this blog to make your guess. A grand prize winner will be chosen randomly from the correct entries after the blog tour is over, on December 24th. What’s the prize, you ask?

Winner gets a $25 gift card to Barnes & Noble, a signed copy of Marked, and a character from a future book named after him/her.

Be sure to check each participating blog on the tour for interviews, guest posts, excerpts, reviews, individual blog prizes (all sorts of Mindspace Investigations goodies) and, of course, the clues!!

So, there you have it. You can right click and save the clue list below. Under the checklist is our schedule of blog tour hosts. Also… it’s only a week until VACANT is available for everyone!! Thank you for your support thus far. I’m excited to see everyone’s thoughts about the book, the blog tour, and the game.

CLICK HERE TO MAKE YOUR GUESSES AND ENTER TO WIN!

December 24th – Scavenger Hunt closes at midnight – winner randomly chosen (from eligible entries) and announced. You must get ALL THREE GUESSES correct to be eligible to win. GOOD LUCK!!

Hi all, my good friend and writing partner Kerry Schafer stopped by the blog today to talk about writing books that don’t fit in boxes. Thought you guys would enjoy.

Take it away, Kerry.

I’m not a fan of labels.

Whenever anybody says to me something along the lines of, “Oh, you’re a nurse/mother/counselor/survivor” or – and I really hate this one – “widow” – it makes me want to snarl and throw things. None of these things define me. I currently work as a nurse, but I have also worked as a mental health counselor and lumber piler, among other things. And yep, I’ve got kids, but there’s a lot more to me than motherhood. As for the whole widow thing, it’s a horrible word and a nasty little box I refuse to be crammed into.

When it comes to books, I feel the same way, although I do acknowledge the necessity of some sort of classification system to make it possible to find what you’re looking for.

For example, if you want to buy a book in which an intelligent protagonist solves a crime, you look under mystery, or possibly thriller. The words High Fantasy conjure up an instant image of swords and mages and and maybe an elf or two. Urban Fantasy tends to be a kick ass heroine faced with supernatural elements in and out of the real world. But what happens to the half breed books that are neither one nor the other? What shelf do they end up on in the bookstore? How can they be marketed so that the reader expecting one thing is isn’t disappointed by finding something different on the page?

I was blissfully ignorant of sub genre when I was writing my first published novel, Between. In the privacy of my own head the division is pretty clear cut. Books are either Fantasy, or Not Fantasy. I will happily read anything with fantastical elements, so long as it’s well written and has characters I like to hang out with. It doesn’t matter to me what kind of magic is involved, or whether there are swords or guns, vampires or orcs, so long as I’m taken on a journey far away from reality.

So I wrote what I like to read – a mix of fantastic and real life elements, with characters who must grow into their destiny. When my brand new editor said, “I think we’ll market this as Urban Fantasy,” I said, “Okay, sure,” and then hit the internet to find out exactly what Urban Fantasy was. As it turned out, a lot of hard core Urban Fantasy fans were not entirely happy with this decision, as Between doesn’t quite fit the bill.

Urban fantasy is a sub-genre of fantasy defined by place; the fantastic narrative has an urban setting. Urban fantasy exists on one side of a spectrum, opposite high fantasy, which is set in an entirely fictitious world. Many urban fantasies are set in contemporary times and contain supernatural elements. However, the stories can take place in historical, modern, or futuristic periods, and the settings may include fictional elements. The prerequisite is that they must be primarily set in a city.

There are other expectations for Urban Fantasy: a kick ass hero or heroine defending the real world from supernatural creatures. Often there are vampires or werewolves. I’ve never written an urban setting in my life, and my characters aren’t so good with the kick ass program, since I like to make them as real as possible and see how they react to a sudden weirdness in their world.

When I wrote the Dream Wars novellas, even though by then I was thoroughly aware of the genre conventions, I ran into trouble yet again. Fantastical elements are woven into an ordinary little town. The characters are human with no supernatural powers, and the forays into an alternate reality are brief. The Dream Merchant is known and accepted in the same matter of fact way the gods of Olympus were accepted by characters in the Greek myths. The supernatural blends in with the ordinary and even science in an inseparable way.

So where does this tale fit as far as genre? It’s not really fantasy and it’s not typical paranormal. There are elements of magical realism, but since it’s not literary fiction that’s not right either. There are no shape shifters or ghosts or vampires to be seen.

I have, once again, managed to write an odd book out, one that doesn’t play nicely on the shelves with others.

But the thing is, I love books like this, which is maybe why I write them. Just for fun, I did a little internet research on a couple of books from my shelf that I see as not conforming to genre: A Fine and Private Place, by Peter S. Beagle, and Isle of Dogs, by Patricia Cornwell.

A Fine and Private Place is set in a real life graveyard. The main character talks to the dead and is fed by a raven. Interestingly, the novel is listed as Fantasy, plain and simple. No “paranormal” or “urban fantasy” descriptors even come up.

Cornwell’s Isle of Dogs is classified under Mystery/Thriller, even though it includes a talking fish at one point, and is possibly the weirdest book I’ve ever read. The vast majority of readers who reviewed on Amazon – accustomed to Kay Scarpetta and a traditional thriller – hated this book with great venom. It was not what they expected and they were not happy about that.

Which brings us back again to the question – what is a writer to do?

And the answer, for me, is to just keep on writing what I love, and hope to find the readers who will go with me into fictional realms unlimited by labels.

Alex: You can find out more about Kerry at her website at https://www.kerryschafer.com/. Her latest project, the Dream Runner, is a series of novellas featuring a woman who delivers custom-ordered dreams for a mysterious Merchant. She must return to her hometown, the site of a terrible tragedy. The stories are rich and deep and lovely, and I’m not just saying so because I critiqued them in process.

Buy the first one on Amazon, at Barnes & Noble, or Kobo.